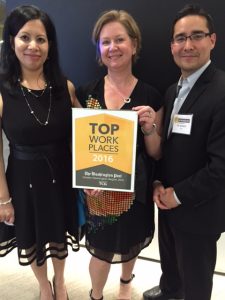 On June 16th, The Washington Post released the highly anticipated sequel to last year’s runaway hit, the Top Workplaces Award. Once again named to the list was audience favorite, TCG, coming in at #1 for custom software development and advisory services, #1 government contracting small business, and #7 overall small business. There are 150 small, medium, and large businesses named to the list in total.

The Washington Post based their rankings on a detailed survey of TCG personnel, proving to us that our employee-centric initiatives are appreciated. For more information on this year’s Top Workplace award, please see our press release.

Already in production is TCG’s third Top Workplace award, scheduled for release in June, 2017, going up against other sequels such as Cars 3 and Kingsman: The Golden Circle.

TCGers Nancy Solorzano, Kim Aguirre, and Tige Nishimoto collected the award on behalf of the company. They claim to have had a good time and sent multiple pictures as evidence. Which is the ‘before’ and ‘after’ is a matter of continuing debate.