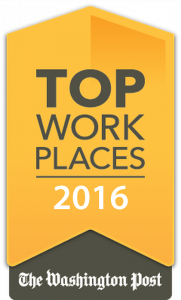 TCG President Daniel Turner took a break from fighting injustice to revel in the glow of a second consecutive Top Workplace Award. He remarked, “Our employees strive for excellence in every aspect of their work. It’s only fair that we strive for excellence in the way we treat them and in the way we manage our culture. We are ecstatic that our employees appreciate our efforts enough to name us a Top Workplace.”