For several months now, my coworkers have encouraged me to attend a TCG Spree. They stressed that, as one of the more than 50% of TCG personnel who telework at least two days per week, it’s extremely important to meet other TCGers face-to-face, and to make connections with my colleagues outside the context of work.

I finally made it to a TCG Spree when Program Manager Sri Arepally held an event at Topgolf in Ashburn, VA. My “lessons learned” are: 1) Topgolf is heckin’ awesome! and, 2) so are TCGers! 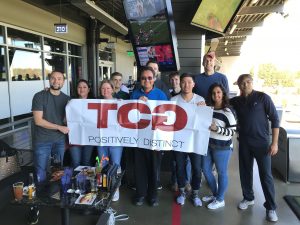 I’m not sure what makes TCGers so friendly and easy to talk to but speaking with many of my colleagues for the first time felt natural, as if we had seen one another in an office every day for months. To be honest, I expected as much because of the meetings that TCG’s WinTeam (where I’m stationed) has with people across the company. However, what surprised me was the ability to connect with everyone about our very different jobs. I was able to contextualize and understand information about someone else’s job with respect to mine. This, ultimately, led to a better understanding of the ways we can support each other and collaborate in the future.

And, as it turns out, TCGers are also competitive golfers (maybe a TCG Golf Team is in the works?). I think I managed to steal a third- or fourth-place finish in one round. Other than that, we spent most of the day chasing Raphaele (the Director of HR), who clearly has secret golf powers and whose high scores were very impressive. From what I overheard of the other group, Sri was also putting up some impressive numbers!

This was definitely only the first of many TCG Sprees for me, so I hope to see some new faces again soon.