All Major League Baseball clubs use analytics these days, and none more than the Houston Astros. The Astros fired most of their scouts and replaced them with data- and video-based analysts. And it worked well: they won the World Series in 2017. This year, the oddsmakers favored them over the Nationals by the World Series’ largest margin since 2007. So what happened? What were the Astros missing this time?

Let’s go back a little. When baseball experts make their World Series predictions every spring, do they ask which team has the most catchy walk-up song? Do they ask which team will have the best dugout dance party? Of course not — that would be ridiculous. Yet, perhaps it’s that walk-up song, that dance party, and the culture they represent that did make the difference. The World Series Champion Washington Nationals’ focus on culture may just be the intangible that made the difference, and analytics can’t measure it.

Anyone who watched the World Series could tell how much fun the Nationals were having. That wasn’t true all season. The Nationals started off very poorly, and were 19–31 in May—one of the worst records in baseball. Around that time the San Francisco Giants told their reserve outfielder, Gerardo Parra, that he was designated for assignment (that’s baseball for “bye-bye”). Presciently, the Nationals signed Parra. He immediately injected his own brand of positive culture to the Nats.

In contrast, did the Astros have a similarly always-positive culture? They certainly didn’t have Gerardo Parra on their bench. A September 28, 2019 article in the Washington Post said, “[Parra] and Aníbal Sánchez, longtime friends from their native Venezuela, began mandatory dance parties after each home run… the music that blares in the clubhouse after each win is played off Parra’s phone. He made “Baby Shark” a nightly ritual at Nationals Park, with fans standing and clapping their hands together like a chomp, and it somehow doesn’t end there. Parra zips into the home clubhouse riding a bright yellow motor scooter most days. He almost always honks his horn to announce his arrival.”

So why are we calling this out? What does it have to do with government contracting?

TCG believes our culture is foundational to the company’s success and that of our projects. Our culture has its serious side, leaning heavily on our Core Values and our belief in the importance of our work. It also has Parra-like lightness wherein opportunities are created for colleagues to relax, let loose, and have new and exciting experiences with each other. For example, we host monthly sprees that allow a TCGer to plan an activity that anyone in the company can join. The company gives TCGers $1,000 to pay for events ranging from horseback-riding and indoor skydiving to escape rooms. TCG has an Employee Happiness Department, where I work, that is the champion of TCG’s culture and employee’s, well, happiness. Employee Happiness hosted Game of Thrones web socials after each episode during the final season, and World Series Recap hangouts after each World Series game. And we bought pizzas for TCGers who shared World Series Watch Parties with each other. 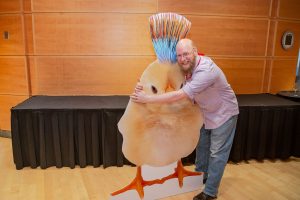 While TCG is not yet at the pinnacle of the government contracting world—we haven’t yet won our own World Series—we are on our way. We raise the banner with our TCG logo when we are cleaning local parks or staffing a fund-raising fun run. Our culture is an invaluable intangible that cannot always be measured in the workplace but we know it’s there because we see it in action across the company. We have our Parras who bring enthusiasm to spark a co-worker’s day or provide extra encouragement on a tough project.

As Jesse Dougherty reported in the Washington Post, “(Parra) wrapped his arms around Strasburg — serious, stone-faced Strasburg — after he exited his start Thursday evening. Others joined in to make it a group hug. And Strasburg, like his teammates, had no choice but to lean in.”

The Nats’ team culture allowed their talent to thrive and helped make them Champions. Companies need to find a positive team culture that will lead them to championships. The results will speak (“Doo-Doo-Doo-Doo-Do Baby Shark”) for themselves.