For the past six months, the NITRC.org development team at TCG has been working on a new user interface design for the collaboration site. The NITRC site was first launched in 2007 and has not been redesigned since 2009. You can imagine the excitement for this makeover. (Unfortunately, redesigning a website is not as easy as Jaqen H’ghar makes changing faces.)

NITRC has thousands of users across the country.  TCG interviewed a subset of representative users to find out what they wanted to see in a redesign, with a focus on how to improve the aesthetics and usability of the site. Based on the information gathered from users, TCG rolled out the new design in December 2017 to a limited group of users to gather additional feedback and work out any bugs. The team has continued to make improvements since then, and released the new design in March. Since debuting the new design, users remarked that the site is “much more readable,” “clean,” and “punchy.”

Funded by the National Institutes of Health (NIH) and designed, developed, and supported by TCG, NITRC is a free, collaborative site and repository of neuroimaging analysis software, publicly available datasets, and virtualized computational environments that can be run anywhere, including on commercial clouds. Initially intended to make government’s research investments available to the public, the broader neuroscience community has adopted NITRC as a way to collaborate, access, and share their resources. 99.97% of NITRC’s code is open source. The code used to build the platform can be reused by other government projects at little to no cost — further extending taxpayer dollars.

Through aggressive promotion of NITRC and improvements based on user feedback, NITRC has become the the world’s primary source for neuroimaging tools and resources. 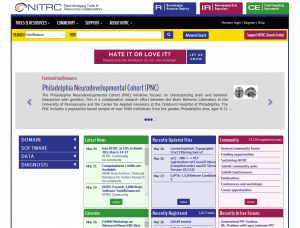