Suicide is the 10th leading cause of death 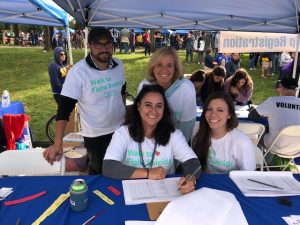 in the United States. For every suicide death, there have been 25 attempts. Around 45,000 people commit suicide each year — roughly 123 suicides a day. With these alarming statistics, it’s no wonder that TCGer Raphaele Pelaez organized a group of people to support the Out of Darkness Walk held by the American Foundation for Suicide Prevention (AFSP) on October 20th. TCGers volunteered by assisting with registration, handing out T‑shirts, helping with activities in the ‘kids’ corner,’ handing out water to walkers, giving away goodie bags, and other general event support.

Their effort and support of the walk is representative of TCG’s mission to improve the world around us, in big and little ways, every day. TCG has been bringing this effort to fruition by encouraging TCGers to identify and plan Charity Sprees and support causes of personal interest to them. A TCG Charity Spree is a monthly event or idea for a charitable cause developed by staff and supported financially by the company.

Alison Wright, TCGer and Out of the Darkness Walk volunteer said, “This year’s walk shed light on the growing rates of suicide in the past decade, and AFSP hosted a number of discussions about suicide prevention.”

Established in 1987, AFSP is a voluntary health organization that educates the public about the prevention of suicide. At their events, they hold discussions on awareness of the warning signs and ways to support those in need. The organization is making mental health awareness a priority by funding scientific research behind this leading cause of death. As their website states: “Before AFSP, there was no national-scope not-for-profit organization dedicated to understanding and preventing suicide through research, education and advocacy.” Visit the AFSP website for more information regarding suicide prevention and awareness. 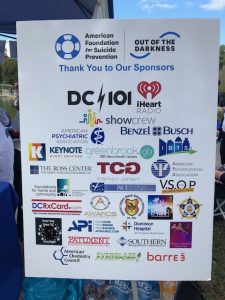 The Out of Darkness Walk is just one of AFSP’s many public outreach efforts to fundraise and inform the public of the rising statistics concerning suicide. These walks take place across the country, and anyone can get involved with helping or participating. Alison stated, “There were some really touching speeches given just before the walk began, where people were reminded that there are people they can reach out to in times of need, people who care, and that those struggling with suicidal thoughts need to ‘hold on.’” AFSP raised $276,821 and hosted 2,206 participants at this years Out of Darkness Walk.