Like a frugal friend that tracks every penny they spend, the government is constantly looking for ways to save money. The new administration, especially, is eager to find savings. By some accounts, President Trump wants to cut up to $10.5 trillion in federal spending over ten years. How and where the government spends money on IT will be one major area of interest as FY2018 budget plans are developed.

The federal budget for IT for FY 2017 is $80 billion, slightly up from FY 2016. 41 agencies and bureaus spent $500 million or more on IT, with the Department of Defense (DOD) spending $30.8 billion. According to data collated on the IT Dashboard, nearly 70% of the federal government’s IT spend is on operations and maintenance (O&M) of legacy technologies. This is a trend, as the development of new IT has decreased by $7.3 billion since 2010 while spending on O&M has increased. Due to a lack of capital investment in IT, agencies big and small have no choice but to spend billions of dollars per year treading water, patching outdated technology, and securing legacy systems when emerging technologies offer more effective and secure capabilities. 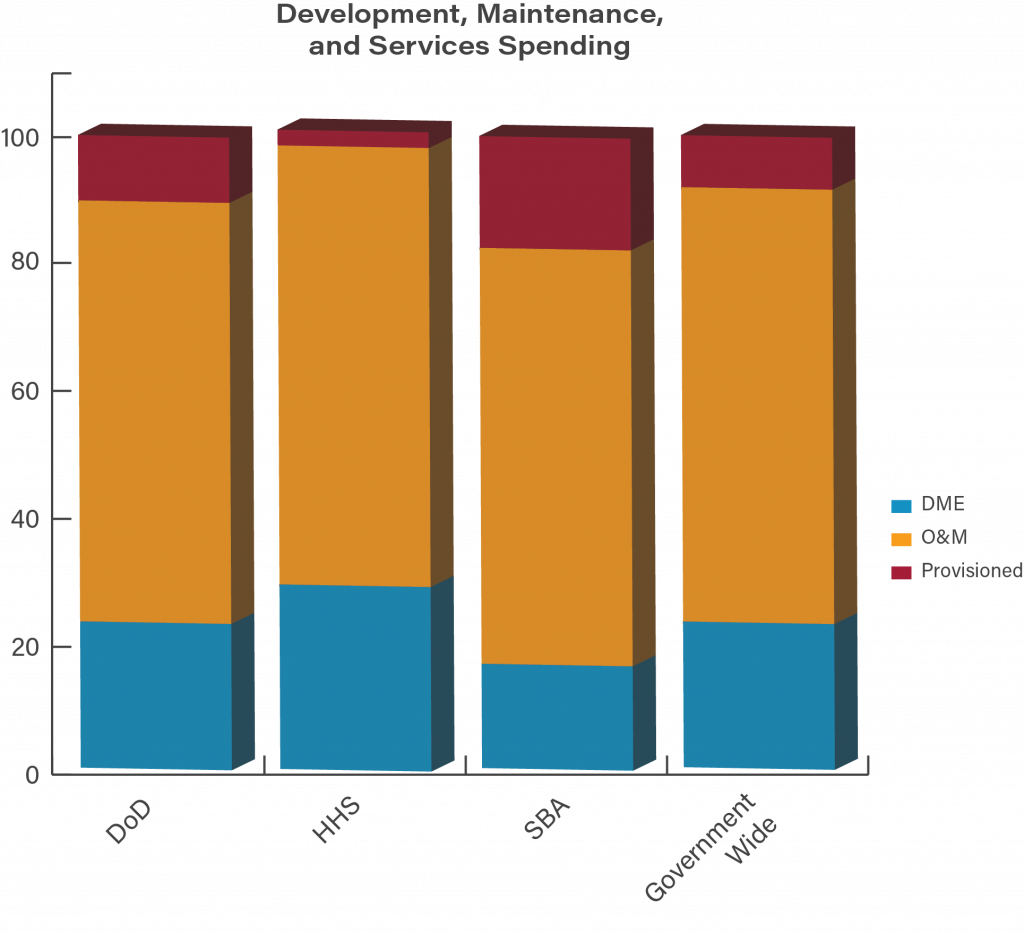 The common thread throughout all agencies is large continuing investments in legacy technologies—trying to keep outdated and, often times, proprietary technologies working. Agency CIOs recognize this, as demonstrated by a Federal News Radio CIO Survey that listed modernizing IT as the second highest priority among federal IT leaders. Yet, it would seem modernization and innovation is crushed under the weight of mission-critical legacy IT. To keep spend down, any new major investment must submit to the Office of Management and Budget (OMB) an Exhibit 300 Capital Asset Plan and Business Case Summary to justify the cost of an IT project. This form leads to an extensive analysis and evaluation of an agency’s technical environment, which can be time-consuming and discouraging to CIOs that want to move quickly to cut their O&M costs and upgrade their environments.

Despite this, there is hope. Congressman Will Hurd plans to revisit the Modernizing Government Technology (MGT) Act which is expected to provide funding to agencies to modernize their IT. Regardless of whether or not the MGT Act passes, there are other strategies government and contractors alike can take to alleviate the impact of O&M spending. Shared services, for example, are a boon to federal technology. The General Services Administration (GSA) and Unified Shared Services Management (USSM) are leading this effort. In addition, using open source technologies to promote interoperability across agencies can help to foster innovation and reduce costs.

Treasury’s Budget Formulation and Execution Manager (BFEM) is an example of successful modernization efforts that have saved money over the long-term. In 2008, BFEM’s long-term viability was under threat due to a technical architecture that had become costly, complex, and laden with significant business risk. A large-scale DM&E effort was initiated and TCG was contracted to help overhaul and upgrade the BFEM architecture to create “BFEM 2.0.” The new architecture moved from a proprietary technology to a service-oriented architecture that leverages open standards. Since “BFEM 2.0” came online, the shared service has grown 250% and is used at 16 federal agencies, including five cabinet agencies.

There is no one solution to the government’s O&M problem. Feel free to contact TCG for information on how we’ve approached shared services and open source technologies to save money or to share your ideas on how to reduce O&M in favor of modernization and innovation.

* All figures for this article were pulled from the IT Dashboard.