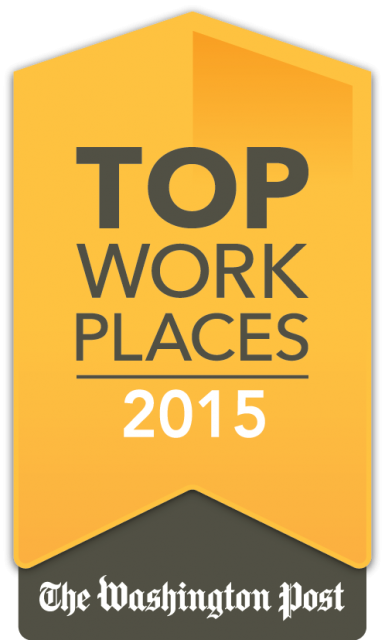 TCG has been named a ‘Top Workplace’ by The Washington Post, recognizing the company’s commitment to employee engagement and welfare. Earlier this year, the company was also named to the Washington Business Journal’s “Best Places to Work” list for the second time, emphasizing TCG’s excellence in providing an energetic, engaging, and satisfying environment for advisory services and IT professionals.

The Washington Post determines DC’s top workplaces by surveying at least 70% of a company’s staff, covering key issues such as benefits, communications throughout the company, and employees’ well-being. TCG was named #4 in the Small Business category and #8 of all businesses in DC.

Once recovered from his giddiness at being named a top workplace, TCG’s President, Daniel Turner, said, “We are lucky to consistently find employees that strive to be the best, day in, day out. Their work ethics, their personalities, and their investment in what they do makes us want to be the best we can, for them. As a result, over the last few years we’ve made a concerted effort to give our employees experiences and opportunities that they wouldn’t have at other companies. The results, in terms of employee satisfaction, has been staggering. Our employees seem to really like working here. I intend to make sure that continues to be true.”

Winners and rankings were announced on June 18th at an award ceremony held in Washington, D.C. The winners were also be published in the Sunday, June 21st edition of The Washington Post. For more information on TCG’s placement and the complete list of winners winners, go here.